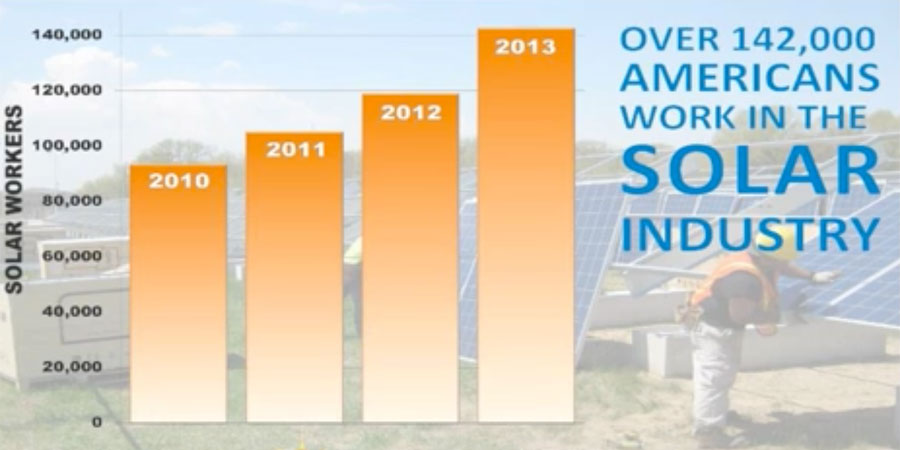 Yesterday, we hosted a webinar with the Solar Foundation to explore their 2013 National Solar Jobs census, the fourth iteration of their highly acclaimed annual report on employment trends in the U.S. solar industry.

Andrea Leucke, the Executive Director of Solar Foundation presented the findings from the 2013 jobs census, and we were again reminded that solar energy is not only providing a way to combat climate change, it is truly an economic engine in this country.

Here are some of the factoids from the webinar that are sure to impress:

New in the 2013 census, the Solar Foundation also tracked jobs down to the district level in the top ten solar markets (CA, AZ, NJ, MA, NY, TX, FL, OH, CO, NC). The report shows that California remains the largest market for solar workers, with nearly 1/3 of all the solar jobs.  Interestingly, the runner up state, Arizona, actually saw a decrease in jobs in 2013. This decrease can be partially attributed to the completion of the 280 MW Solana Generating Facility, which was completed in 2013, though uncertainty about the future of net metering may also be a culprit.  this policy uncertainty is certainly  behind the expected lower than national growth rate for 2014 (5.6% compared to the national average of 15.6%).

The Solar Foundation expects that the U.S. solar workforce will steadily grow in 2014, and that’s a good thing because we have a lot of solar to install!