PHOENIX, AZ — Arizona State Representative Kirsten Engel joined advocates from Vote Solar, Sierra Club, Solar United Neighbors, and Arizona Interfaith Power & Light at the Arizona State Capitol to deliver over 5,000 petitions in favor of a 50% renewable energy standard and a 35% energy efficiency standard by 2030, plus a 100% clean energy commitment by 2045 to the Arizona Corporation Commission (ACC).

“Arizonans want to control where our electricity comes from,” said Bret Fanshaw, Solar United Neighbors Arizona Program Director. “Setting these targets will let us do so. They will enable more Arizonans to save money by going solar.”

The plan, supported by more than 30 local and national climate, justice, Indigenous and community groups, calls for a just and timely transition away from fossil fuels to renewable energy that includes support for frontline communities and promotes more accountability and transparency in utilities’ long-term energy planning processes.

“More and more Arizonans are seeking affordable, clean ways to power their homes and businesses, yet their utilities keep throwing lifelines to their fossil fuel plants with absurd expenditures charged to ratepayers,” said Sandy Bahr, Director of the Sierra Club’s Grand Canyon Chapter. “The ACC has an opportunity to stand up to corporate polluters and support Arizona in a smooth, just transition to renewable energy and more cost-effective energy efficiency.”

A recent report from Ceres on the effectiveness of REST shows nearly $2 billion in gross benefits for Arizona Public Service (APS) and Tucson Electric Power (TEP) customers since 2006. The analysis also found that the current REST created $11.62 billion in solar-industry investments, a 3% reduction in statewide greenhouse gas emissions, and savings of 7,129-acre feet of water annually, enough to serve nearly 44,000 Arizonans.

A recording of the event is available here. Images, with credit to Vote Solar, are available for download here and here. 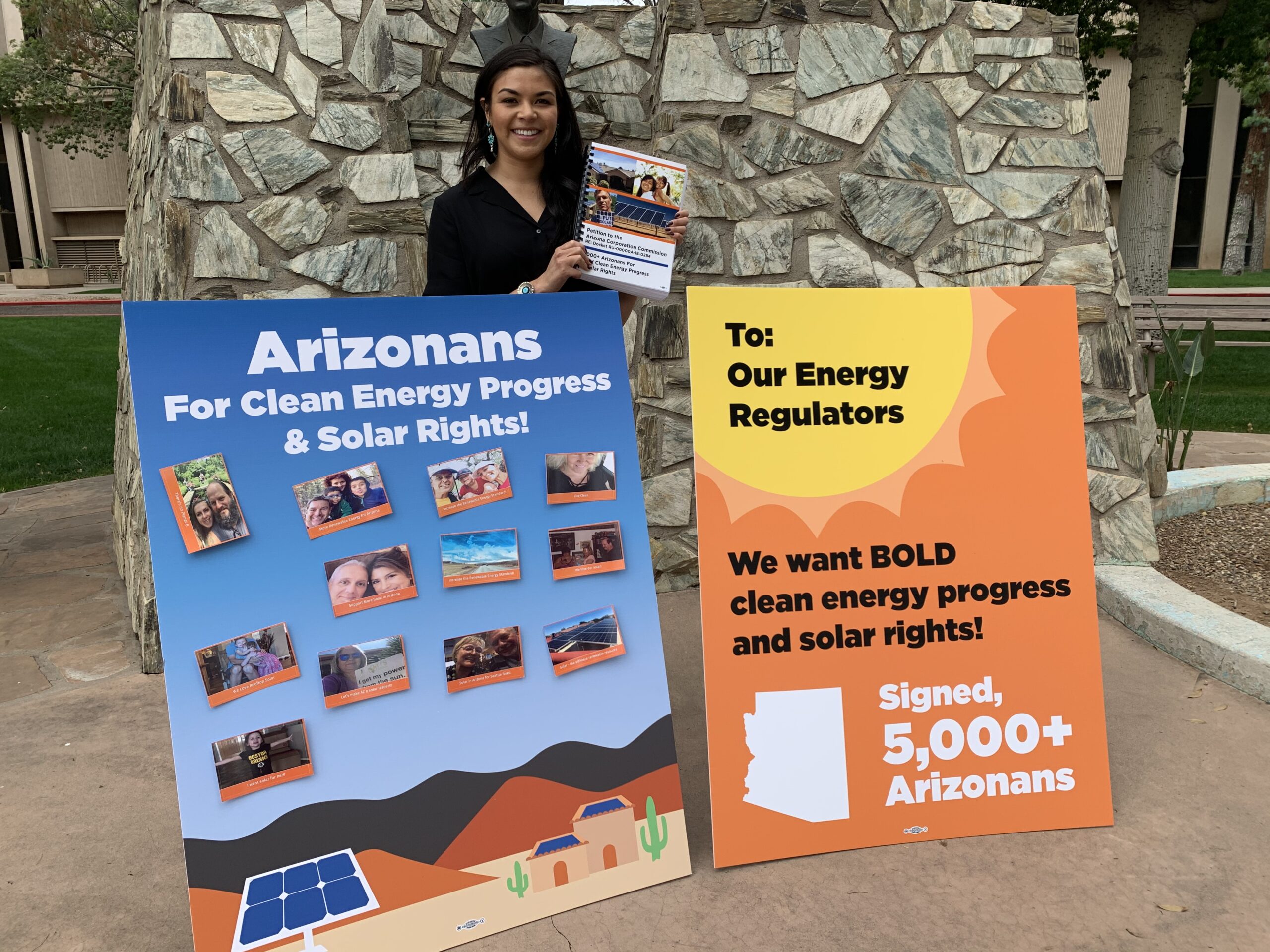 More than 100 Arizona faith leaders have also signed on to a letter urging the Arizona Corporation Commission to establish a renewable energy standard of at least 50% by 2030.  Rabbis, Priests, Pastors, Imams and Native American spiritual leaders from all over the state affirm, “The climate crisis, caused by the burning of fossil fuels, is more than an economic or political or technological issue. It is a moral issue that requires immediate action and transcends all divisions.”

“Our grandchildren won’t ask us, were you a conservative or liberal? They won’t ask us, were you a Jew or a Muslim or a Christian a Buddhist or a Native American. They will ask us, when you had a chance, what did you do to care for my future and the future of this fragile and beautiful planet?“ said Rev. Doug Bland, Executive Director, Arizona Interfaith Power & Light.

Following the event, advocates joined the Renewable Energy Standard and Tariff (REST) Stakeholder Meeting and Workshop at the Arizona Corporation Commission. The workshop will include additional video testimonials and focus on the REST and energy efficiency rules that could help advance clean energy in Arizona.