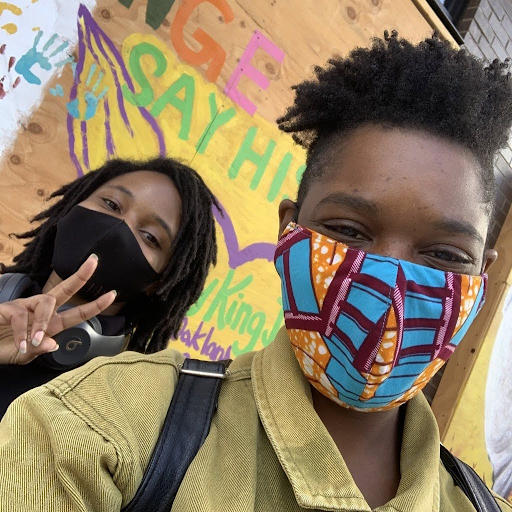 At Vote Solar, Brandy A. Hyatt serves communities with creative solar solutions for energy equity. Brandy shares how racial injustice and climate warnings in their birth year of 1989 shaped the course of their life, and how they unite their passions through energy justice work. Part of a series: Vote Solar Staff Voices

I was born in the summer of 1989, on the tail end of an intense 2-year heatwave that affected all of North America. As I was taking my first breath of life, three of what would eventually be called the Central Park Five were tried in court. My birth year, though unknown to me at the time, would influence the person I am today. And those same environmental and racial justice issues that I was born into would continue to affect me today.

During my early childhood in Brooklyn, NY, my community taught me about the Central Park Five: five Black boys who were falsely accused of rape and attempted murder by a white woman. The story was used as a cautionary tale. Don’t venture off too far, stay close to home, be in before the streetlights are on. At first, learning all of this made me frightened of the world I entered, afraid that I would be hurt in a similar manner, that my life could be cut short because I was in the wrong place at the wrong time. The more I learned about the history of Black folks, the more anger and frustration I began to hold, which motivated me to do something about the systemic racism that I and others like me faced.

The Central Park Five and other stories like it are why, at twelve years old, I attended my first protest against police brutality. It was why I began calling out racist policies in my high school and college, why I petitioned for less police presence on my high school campus, attended meetings to get a grocery store put in my community because it was a food desert and protested housing discrimination. This is why moments like the murder of George Floyd, which happened in the neighborhood where I spent my adolescence, move me to action.

That same year, my birth year, the EPA released a damning climate report, The Potential Effects Of Global Climate Change On The United States. This report, along with the climate warning released by the UN just a few months prior, initiated a short-lived push in climate policy. Although I didn’t realize it at the time, climate change was affecting my everyday life — from extreme summer storms in Minnesota that would take out our power to some of the coldest winters on record. Being the oldest child in the home, I was tasked with helping make emergency bags for the house and picking up dry ice on my way back from summer school. I spent the money from my part-time job buying portable heaters for when our outdated water heater would finally give out in the dead of winter, like it did every year.

I realized as an adult that I wasn’t the only one who grew up in these conditions and that something had to be done. So many of the Black people in my life had to decide between feeding their families for the month or being behind on their heating bills. I had family members who lived in mismanaged housing developments that would flood every summer, and when the landlords finally got funding to update the property, they raised the prices and evicted them. I was livid, appalled that Black people were not able to access the same upgrades as others in the community, and once they finally did, they were pushed out and forced to live in another poorly-managed home. I started doing research and found places to tap into my community to help. I began working with my neighborhood association to help with updating water heaters in older housing stock and started planting trees in areas that were heavily affected by car emissions.

I moved in the summer of 2014, after living through one of the coldest winters on record in Minnesota. I was desperate for a break from extreme weather, so what better place to move than Oakland, CA during a drought? At least I would be warm. Once in Oakland, I continued attending protests, volunteering and attending city council meetings. For the first few years in Oakland, my climate justice work was mostly volunteer. I never thought about making it a career until 2017. 2017 was the first year I experienced massive blackouts and wildfire smoke. I felt like I was not doing enough, that my one-off volunteer work wasn’t moving the needle the way I wanted. I wanted to make a bigger impact. A friend suggested I get into policy. I did some research, applied to graduate school and looked for open job positions in the environmental sector.

This eventually brought me to Vote Solar where I could learn more about policy and effect change in a different way. As a Manager on the Access & Equity program team and Operations team, I’m able to unite my two worlds. I think of creative ways to expand solar access to those who have historically been shut out because of racist and classist policies — those folks in the communities I grew up in, predominantly Black and low-income. Now that there is real momentum behind the climate crisis, it’s important that we ensure the most marginalized of us are included in this fight and its solutions.

My birth year truly impacted who I am today. From climate change to racial justice, I am invested in being a part of the solution to problems not of my doing. I intend to leave my community and the planet better off than when I arrived.