H951 would put utilities in control of carbon path, even as new analysis shows increased risk — up to $6 billion — in stranded carbon-emitting assets

On Friday, October 1, a new draft of House Bill 951, “Energy Solutions for North Carolina” was released to the public. The bill was written with significant input from Duke Energy, and with very little opportunity for engagement or contribution from other stakeholders.

While Vote Solar applauds the inclusion of carbon reduction goals, the bill would cede power to investor-owned utilities, reducing the oversight ability of energy regulators and limiting options for North Carolina ratepayers. The bill also includes authorization for a complex multi-year rate plan that would tip the playing field in favor of utility shareholders and away from ratepayers in the Carolinas.

“We thank Governor Cooper for his bold vision and steadfast commitment to a carbon neutral future for North Carolina,” says Tyler Fitch, Vote Solar’s Regulatory Director for the Southeast. “A 70 percent emissions reduction by 2030 and carbon neutrality by 2050 are worthy goals for the state, and their inclusion in legislation is a major step forward. However, the bill would grant undue influence to investor-owned utilities in charting North Carolina’s path toward a climate-resilient future. As written, House Bill 951 locks us into a narrow, Duke-owned energy future.”

The bill also lacks meaningful solutions to the energy affordability crisis faced by low-income North Carolina residents. “Our most energy-burdened communities are in urgent need of protections and relief,” says Lindsey Hallock, Vote Solar’s Senior Regional Director for the Southeast. “Utility bills are already too high for low-income ratepayers, who are disproportionately burdened by energy costs. Rather than use this opportunity to craft equitable legislation via an inclusive and transparent process, Duke has chosen to prioritize its own interests.”

The bill language was released on the heels of Duke Energy’s modified Integrated Resource Plan (IRP) for South Carolina, which the company filed with the Public Service Commission on August 27. Analysis conducted by Vote Solar found that Duke’s modified IRP – which will ultimately be the same for both states – would result in more stranded assets than Duke’s original plan filed in 2020, due to an expanded buildout of several gigawatts of additional gas-fired power plants. In total, costs to ratepayers from these stranded fossil plants would cost ratepayers over $6 billion over the next few decades, equivalent to a $1,100 bill due today for every one of Duke’s residential ratepayers in the Carolinas. 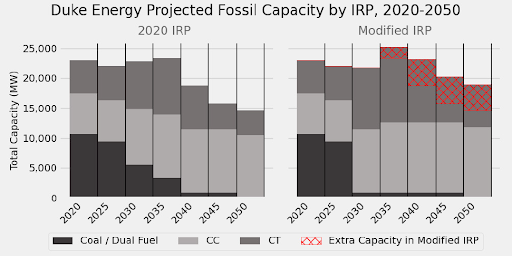 “Our carbon stranding analysis shows that Duke Energy has a track record of failing to comply with its own carbon commitments,” Fitch said. “Without an enforcement mechanism for meeting carbon goals in this bill, we are not confident that Duke’s future plans will be any more credible.”

House Bill 951 is moving quickly through the state legislature, with both chambers expected to vote as early as this week.