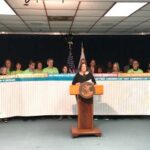 This morning, on the eve of legislative session, dozens of activists delivered petitions from 23,000 Illinois residents to Governor Pritzker’s Offices in Chicago and Springfield supporting the passage of the Clean Energy Jobs Act (CEJA) this spring. CEJA is a comprehensive bill that puts Illinois on a path to a carbon-free electric sector, lowers electricity costs, reduces pollution from transportation, protects communities, and creates equitable job opportunities in communities around Illinois.

Hundreds of volunteers and organizers worked throughout the year to talk to their neighbors about CEJA, and garner petition signatures in support of passing the bill. CEJA is currently the only energy bill in the General Assembly based on bottom-up feedback from communities across the state, collected through community dialogues in more than 50 different Illinois communities in 2018 that focused on energy, jobs, and the environment. These signatures, meanwhile, were collected throughout 2019 and show the widespread support that such a comprehensive and community-informed bill can gain.

July 2019 was the hottest month in recorded history. This past year, all 102 counties in Illinois were declared agriculture disasters due to extreme weather, and just a few weeks ago, two Chicago beach fronts were destroyed in flooding.

Carla Wilson, a student at Harper Community College, volunteered to collect signatures with the Sierra Club, “Climate Change isn’t waiting for anyone. I am scared that for the rest of my life I’ll keep hearing and witnessing climate change threaten our home. I got involved in all of this because I am done with not having a voice in my future. We have to write to our leaders and express to them that Illinois isn’t going to sit back and let the worst happen.”

This year, Vistra Energy abruptly shuttered four coal plants in Illinois, resulting in lost jobs and property tax revenue in those communities. Dozens of towns and cities are now at risk, as corporations that have been polluting communities for decades cut and run. CEJA is the only comprehensive energy bill that proposes a just transition policy shaped by feedback from residents in coal communities. CEJA would help coal communities weather significant losses to their tax bases and creates incentives to direct new renewable energy development where it is most needed. CEJA also advances programs that prioritize good green jobs, entrepreneurial opportunities and programs that put wealth-producing assets in the hands of environmental justice communities and others too often left behind.

Colin Byers of Clean Power Lake County said, “CEJA is about transforming who holds the power in Illinois and building a sustainable economy that works for everyone — not just utilities and out of state energy companies. It ensures this transition to 100% is just, helping to repair the legacies of pollution and divestment and delivering on the economic promise of clean energy.”

Last month, Trump appointees on the Federal Energy Regulatory Commission issued a ruling that would force Illinois consumers to pay extra for electricity generated by coal and other dirty sources of power that aren’t needed to serve local demand. FERC’s order amounts to another massive bailout for coal and gas companies resulting in what could be the largest electric increase in Illinois history. Illinois can protect itself from these rules by passing CEJA this spring.

“The FERC ruling would slam northern Illinois consumers with an electric increase of up to $864 million a year,” said Christina Uzzo, environmental outreach coordinator for the Citizens Utility Board. “But the Clean Energy Jobs Act would shield consumers from these higher bills—and it includes ironclad consumer protections that guarantee cost savings for ComEd customers. We urge Springfield to pass CEJA, because it would empower the state to secure clean, affordable energy for all Illinois consumers.”

Three years ago the Future Energy Jobs Act fixed a broken renewable energy policy in the state, jumpstarting the industry after a seven-year stagnation. Unfortunately, because of limited renewable energy funds, that growth will lead to a bust in the renewable energy market, and put in jeopardy the new jobs and workforce efforts that have come with it.

Illinois faces huge challenges over the coming months, but CEJA presents an opportunity to confront all these challenges while improving day-to-day life for countless Illinoisans. This bill has garnered overwhelming grassroots support, because it was shaped by and for everyday Illinoisans.

“CEJA gives our state the opportunity to double down on our clean energy investment, lower energy costs and create even more safe, quality jobs in communities that need them most, while helping to build a healthier planet for all. SEIU members like me stand ready to help make CEJA a reality as we continue to fight for social justice on all fronts, along with the good, union jobs our communities need to thrive.” said Lena Frazier of SEIU Local 1.

The Clean Energy Jobs Act will:

Take Action: If you live in Illinois, raise your voice for the Clean Energy Jobs Act!

My name is John Delurey and I am the Midwest Director for Vote Solar, a non-profit solar advocacy organization. Before joining Vote Solar, I worked in the Illinois solar energy industry for a small company started right here in Illinois. Thanks to the Future Energy Jobs Act that passed back in 2016 – largely due to the tireless work of people here in this room – that company was able to grow from a distant dream to a booming reality. When I left – not too long ago – they had just over 30 employees. They recently hired their 50th employee and hope to continue growing at this pace.

Unfortunately, that growth is now threatened.

The funding made possible by the Future Energy Jobs Act is running out. The Illinois Power Agency, the state authority tasked with managing the renewable energy programs, has publicly stated that the available funding is insufficient to hit the state’s goal of 25% renewable energy by the year 2025. In fact, current funding might not even get us to 10% by 2025.

These funds – provided in the form of renewable energy credits (or RECs) – drew companies and investment into the state. These funds allowed home-grown businesses like my former employer to thrive. Solar businesses – and the jobs and tax revenues they bring – are booming throughout Illinois. While the rest of the country saw solar jobs drop 3.2% in 2018 due to policies and tariffs from the Trump administration, Illinois’s solar workforce surged with a 37% increase. That growth has certainly continued; more solar was installed in Illinois during the first three quarters of 2019 than in the prior ten years combined.

The appetite is clearly there. Look no further than the community solar program, where 919 projects were submitted. Only 112 were selected. This left over 800 projects on the waitlist. Many of these proposed projects have since withdrawn due to the funding gap. Others are holding onto hope, waiting for our elected officials to act in Springfield so they can build these projects, create jobs, and provide solar subscriptions to people who don’t have a roof suitable for solar.

But without predictable funding, many of these new solar businesses will need to level off and slow their growth. Some will disappear entirely.

These are real people with real jobs that are at real risk. They are my friends and former colleagues. They are solar panel installers and geographers, customer service representatives and electricians. They are returning citizens recently graduated from FEJA’s workforce development programs. They are proud to work in the renewable energy industry and deeply concerned about what happens when the rug gets pulled out from under them.

There is good news, however. It’s called CEJA – the Clean Energy Jobs Act. CEJA will put us back on track to achieve Illinois’s renewable energy goals. It provides much-needed predictability to the solar economy. Armed with this predictability and driven by our shared commitment to climate action, the solar sector will help make Illinois a national leader on solar jobs and solar growth. We urge Governor Pritzker and our elected officials in Springfield to provide much-needed leadership and pass CEJA now.