Only the Clothes on Their Backs: Why I Fight For Energy Democracy - Vote Solar
Skip to content

Only the Clothes on Their Backs: Why I Fight For Energy Democracy 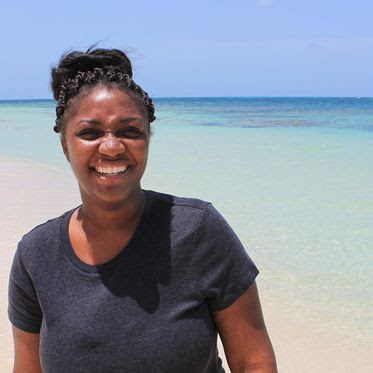 My path to joining the Vote Solar team has been an incredible and unexpected one. My role as the new Policy Director, Access & Equity Program, will help to build on the already amazing work Vote Solar has done, to make sure low-income and communities of color are included in a just and fair way as we transition to a clean future. This position and work is close to my heart just as my family is, which means that I will fight as long as possible to defend and protect them.

My family comes from a small island in the eastern Caribbean called Barbuda, more commonly known collectively as Antigua and Barbuda. Like many other Caribbean islands, Barbuda has a long history extending through slavery and obtaining independence from their British colonizers. Barbuda is everything that is beautiful about the Caribbean, untouched by tourism, beaches full of pink sand, and a unique communal land use provision.

The Barbuda Land Act allowed land on the island to be held in common. This means that land could not be bought or sold, by birth you have right to the land, and developers can lease the land for 50 years only if their project wins the consent of a majority of Barbudans. This way of life is an example of how the redistribution of land to freed slaves and their descendants combined with strategic economic planning can help to preserve a culture and give power to the people about how fast or slow changes take place.

With this beautiful oasis also comes extreme weather events like hurricanes, and in September 2017, I watched the news on a cold rainy day as the inevitable was about to take place. The forecast showed that hurricane Irma was heading straight for Barbuda and upgraded to a Category 5, with wind speeds up to 185 mph.

From Florida, we knew the gravity of what was about to happen and there was nothing more than “stay safes” we could offer. We talked on the phone as long as we could, hearing the wind howl in the background.

There is nothing like hearing your grandmother pray and little cousins crying, that haunts you to your core.

When the line finally went dead, all that was left was to watch the news and wait for updates. By the next morning, we began to see the first set of images coming from the island, and there was nothing left.

No buildings, no homes. Only people with the clothes on their backs.

There was a rush to evacuate all 1,800 islands residents out of fear a second hurricane was approaching. As a family we streamed a local radio station from the islands that was broadcasting lists of people who were missing, and families trying to connect. We received our first messages late in the evening that everyone was safe and off the island.

Hurricane Irma left the island uninhabitable and unleashed a host of challenges and barriers to return home. My family was displaced from their home for almost three weeks. As people began to return home, electricity was not restored almost two months later. Families were relying on generators, and scavenging for plywood and corrugated iron to fix roofs. Multiple trips to mainland Antigua were made to bring in supplies and resources.

One thing we often see in times of disaster are backroom deals and efforts to take advantage of the people and what little they have for a profit. This race to pillage the land and its resources surfaced in efforts to make changes to the Barbuda Land Act and lease land to Robert De Nero to build a large luxury resort.

With all of this happening, I thought about the connections between solar plus storage and resiliency. I also thought about what this would look like in practice. Energy democracy allows for the community to innovate, plan, and make the decisions that lead the creation of local renewable energy. The ability to decide how quickly life resumes after a natural disaster, rather than waiting for the government to take action is democratic. The rate at which residents rebuild the island is democratic. And the ability to choose their energy source is democratic.

My push for a transition to solar is not based on trends or my new role, but from a clear demonstration that solar can help a people preserve their way of life while exercising control over their future. If Robert De Nero builds his luxury resort, then Barbudans can supply the energy needed to run the place. This idea transcends the common visuals of outsiders coming in and hiring locals, and creates a mutually beneficial exchange where the people employ the outsider. In the 21st century, the notion that we are still allowing wealthy foreigners to come in and essentially deploy modern day colonization in Black countries— without input or consideration of the people— only further sets back decades of progress.

There have been recent announcements that the Abu Dhabi Fund for Development is funding half a dozen megawatt scale projects featuring solar throughout the Caribbean and Africa. This $105 million plan will allocate a $15 million loan for an 8 MW solar-wind hybrid power plant in Antigua and Barbuda. While this is a step in the right direction, I want to see efforts to supply the people of Barbuda with solar plus storage. The ownership of solar by the community can only add to their already communal way of life. I know that despite Hurricane Irma and any outside pressure that Barbuda is resilient.

As I look forward to what I hope is a more thoughtful and inclusive future for Barbuda, I see those same needs for low-income and communities of color here in America. Through energy democracy we can empower everyone to control and take the lead on energy issues. Solar enables communities to make democratic decisions about how they receive their energy. When communities have this option, decisions about health, personal wealth, and local economy can be made to benefit those who are directly impacted.

If you’re with me for an equitable, resilient solar-powered future, speak out to demand urgent clean energy action in 2020 from your state Governor.

Learn more: Planet Money Podcast – The Island No One Owns on Barbuda’s unique history of communal land use, and the threats to community power and ownership since the devastating impacts of Hurricane Irma.