Power Schools in Florida with Solar! 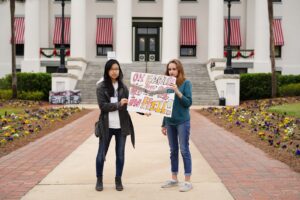 I learned to read and write in a Florida public school. Now as a mom, I know that when it comes to our schools, every dollar matters for our kids’ future.

This is where solar power comes in: if the average Florida public school installed a 100 kilowatt solar system, they could save an average of $16,000 per year on their electric bills. If all 4,517 public schools participated, those savings would add up to over $70 million per year — or over 30 million school lunches!

But outdated laws are standing in the way of big savings for our schools — savings that could be reinvested in Florida’s nearly 3 million public school children.

At the Climate Strike 11th grader Sabrina Hu and her friend Charlotte organized in December, she stood by her truth in the face of hostility. “There was an angry man who tore our sign in half — and we decided to turn it into a powerful statement,” she says. (Sabrina & Charlotte are pictured above.)

Sabrina and Charlotte are Florida’s future, and they’re fighting hard. But their Tallahassee high school has just one trained mental health counselor for over 1,300 students.

That’s why Cleo Institute intern Sabrina supports the Solar Schools Bills that will help schools across the state get the funding they need, while moving the Sunshine State forward on healthy, clean, cost-saving solar. “Our representatives should act quickly to help schools save the climate and on their electric bills.”

Floridians: Let’s tap into the power of the sun for our schools: Tell your state representatives: Power Florida’s schools with solar! Co-sponsor these common sense bills to save millions on energy costs and reinvest in educating Florida’s children.

The average Florida school could save around $16,000/yr by installing solar. Lawmakers are considering 3 bills that would make it easier for schools in FL to go solar. Learn more and tell your lawmakers you support #solar schools by going to https://t.co/SgnTdiKQX5 @votesolar pic.twitter.com/miUO7mP9q8