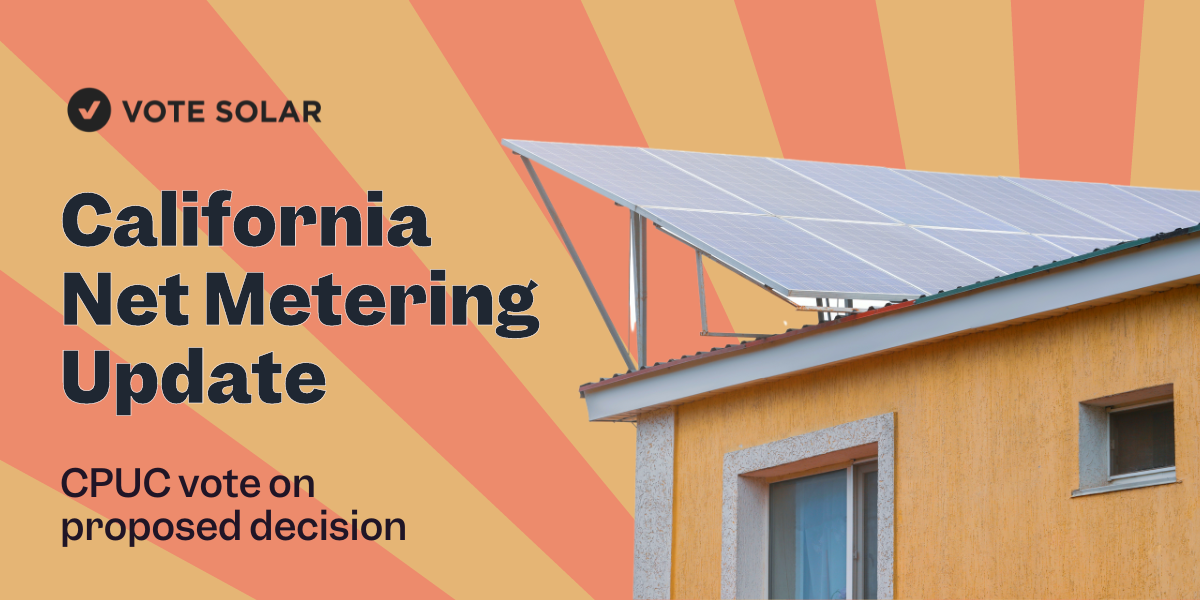 Sacramento, CA – Today, Governor Newsom’s California Public Utilities Commission (CPUC) approved a massive overhaul of the state’s foremost rooftop solar policy, net metering. Despite calls from Vote Solar, other advocacy organizations, and tens of thousands of Californians, the approved policy maintains inadequate support for low-income and other disadvantaged communities to adopt solar and benefit from the same bill savings and local environmental benefits that many other Californians have received.

“Governor Newsom’s Utility Commission has yet again chosen not to fully enable solar as a tool for climate and clean energy justice. They have ignored the true costs and barriers that disadvantaged communities face in going solar and included only an unaccountable promise to work on this in the future,” said Sachu Constantine, Vote Solar’s Executive Director.

The approved plan, occasionally referred to as NEM 3.0 and now officially termed Net Energy Billing, updates the foundational clean energy policy, which has been instrumental in California’s rooftop solar adoption, that allows customers with onsite solar to save on their electric bill by receiving a credit for the excess clean energy they send back to the grid. Once the proposal takes effect in April 2023, new rooftop solar customers, including those in disadvantaged communities who would benefit most from energy burden and climate relief, will see their potential savings slashed significantly.

The CPUC released yet another revised proposal on December 14th with minor changes to the October proposal in regard to low-income support. The updated and now approved policy fails to acknowledge the true additional costs these customers face when going solar. The CPUC improved its definition of ‘low-income’ to include populations living in disadvantaged communities or in Tribal nations. The new definition will provide a small increase in compensation for more low-income Californians as well as correlating with other historically disadvantaged populations, such as Black, Indigenous, and people of color. While this brings the policy closer in line with broader statewide efforts to address energy and environmental inequity, the poor reckoning of costs and barriers these populations face will continue to stymie an equitable solar market.

“I am disappointed in Governor Newsom and his CPUC for their reluctance to craft policy that would promote historically disadvantaged communities’ access to rooftop solar and streamline California’s journey to 100 percent renewable energy by 2045,” said Constantine. “The drastic decline in the rate that solar customers will be paid for their valuable solar exports harms California families by stifling climate progress.”

The approved policy rejects the original proposal’s solar fee, institutes a glide path for the solar export rate, and refrains from infringing on customers’ right to generate and consume their own energy behind the meter. However, the proposed glide path falls short of creating a smooth and comprehensive transition from the state’s current solar policy in many ways.

The proposed ‘glide path’ to help transition the solar market to this new policy paradigm includes a sudden and significant initial reduction in the value of solar exports. This combined with the inadequate disadvantaged community solar assistance provisions hinders rooftop solar expansion at a time when the federal government has committed to monumental investments in clean energy progress.

Further, the proposed diminished export rate minimizes savings for all rooftop solar customers, especially low-income families whose energy bills account for a larger portion of their income. In effect, the proposed decision would create considerable barriers for millions of low-income and otherwise disadvantaged families who already face additional barriers in considering rooftop solar.

The CPUC, which regulates the state’s investor-owned utilities, opened a proceeding to update net metering in August 2020 and released the first NEM 3.0 proposal in December 2021, which was met with fierce opposition from the general public, environmental organizations, celebrities, and the solar industry. Advocacy organizations and the public pushed back against the proposal’s call to drastically reduce monthly solar savings and add large solar-only fees for the majority of residential solar users. After almost a year and thousands of calls from the public, the CPUC withdrew its proposal, accepted additional comments, and issued a revised proposal in October 22 and then again in December 2022.

Vote Solar was a stakeholder in the CPUC proceeding in 2021 and 2022 leading up to the proposal and has played an influential role in shaping NEM policy in California for over 15 years. The CPUC will now work with California utilities and the public to implement the updated net metering decision. Changes from the proposal will go into effect in April 2023 with rooftop solar customers prior to that date receiving legacy benefits under NEM 2.0.