New York Passes Most Ambitious Climate Bill in the Nation

In the early morning hours of June 20, lawmakers passed New York’s landmark Climate Leadership & Community Protection Act, the most ambitious climate bill in the nation! Thanks to thousands of New Yorkers who spoke out for solar jobs and savings, healthier air, and a more just energy future, we are now officially on the way to a Million Solar Strong New York and 100% clean electricity. 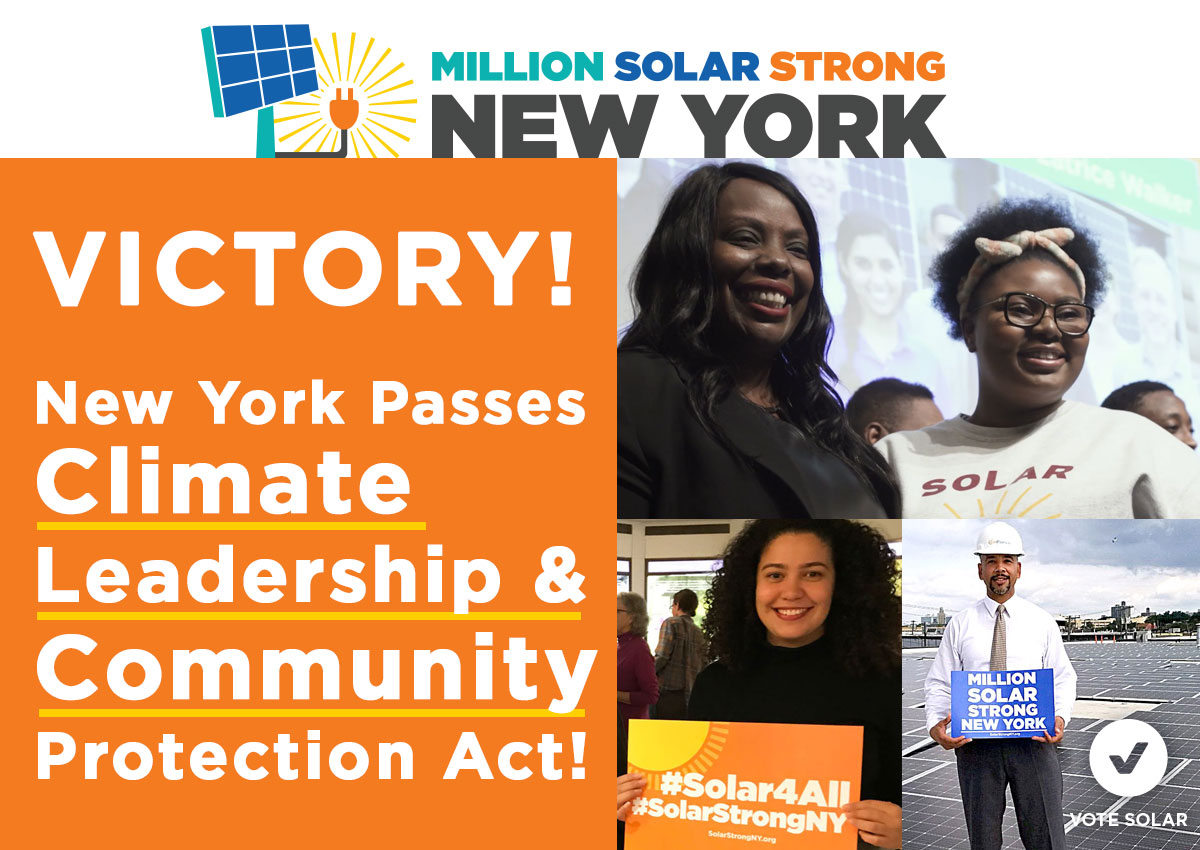 Here’s what this sweeping climate and clean energy bill will achieve across the state of New York:

Over the past two years, we’ve given it our all for a strong clean economy that works for all New Yorkers. You’ve been with us as part of an unstoppable movement of environmental justice communities and climate champions, elected leaders, businesses, faith leaders, community organizers, and everyday New Yorkers.

While the federal government has ignored the threat of our growing climate disaster and rolled back efforts to move us forward on clean energy, today the Empire State has taken a stand.Governor Cuomo has committed to signing the bill, stating that “climate change is the issue of our lifetime, and the legacy we leave to our children.”

Being in Albany this week, I got to see the strength and diversity of this movement firsthand as New Yorkers took to the halls of the capitol calling for urgent action for the good of our communities and climate. You all inspire me with your individual stories and the power of everything that we can accomplish together.

And our work is far from over. We must be tireless and vigilant to build a new energy economy that is both clean and just across the U.S., and ensure New York implements these complex new policies in a way that delivers on today’s promise of an equitable transition to 100% clean energy. Our lives and the world that we’re leaving to our children depend on it.

Thanks to our tremendous partners for joining with us for a Million Solar Strong New York and to the thousands who were part of this remarkable clean energy and climate justice success story.

See our press release below:

The Climate Leadership and Community Protection Act agreed to earlier this week by Gov. Cuomo and the state Senate and Assembly includes a requirement for 6 gigawatts of local, distributed solar energy by 2025, which the Million Solar Strong Coalition has sought for the past two years, enough to power one million homes throughout New York. A report released earlier this year by Vote Solar estimates that achieving this solar goal will sustain more than 11,000 jobs between now and 2025.

We are thrilled that the new Climate Leadership and Community Protection Act passed today heeds our call to take Gov. Cuomo’s stated goal of 6 gigawatts of local, distributed solar energy by 2025, enough to power a million New York households, and put the force of law behind it. It also includes a strong commitment to serving low-income and environmental justice communities, which will help ensure New York is building a new energy economy that is both clean and just. At a time when President Trump and the federal government have ignored the very real threats posed by climate change, we hope other states will follow New York’s lead. Our lives and world that we’re leaving to our children depend on it.”

From Betta Broad, New Yorkers for Clean Power director: “We applaud the legislature and Governor Cuomo for leading the nation with this historic legislation to significantly reduce greenhouse gas emissions and scale up renewable energy. We’re especially excited about the inclusion of the 6 gigawatts of distributed solar by 2025 that will enable communities to install more local clean power and more equitably share the benefits of renewable energy.”

We are also profoundly grateful to our partner organizations, policy makers and advocates for their tireless work that brought us to this moment. Guided by this bold vision, NYSEIA’s member companies stand ready to continue investing in New York State’s electricity infrastructure and our workforce to help reach this legislation’s full potential. New York now has a bold mandate to clean up the electric grid and improve air quality and public health for millions of New Yorkers that also rises to the challenge of the climate crisis with urgency and innovation.”

From Sean Gallagher, Solar Energy Industries Association vice president of state affairs: “With passage of this bill, the Empire State is on the right path to growing its economy and tackling the greatest environmental challenge of our time. Codifying a 70 percent renewable energy requirement by 2030 and mandating 6 gigawatts of solar by 2025 will solidify the state’s energy policy for years to come and bring solar to millions of New Yorkers.”

From Jeff Cramer, Executive Director for the Coalition for Community Solar Access (CCSA): “We applaud the hard work by New York’s policymakers to successfully pass this bold and necessary climate plan. The community solar industry stands ready to help achieve the goals outlined in this plan by providing equitable access to clean and affordable solar energy for anyone who pays an electricity bill. We look forward to working with the state and the Million Solar Strong Coalition to ensure New Yorkers can realize all of the benefits that community solar offers, while creating a cleaner and more resilient energy future in New York.”

The groups also thanked and congratulated bill champions Senator Kaminsky and Assemblymember Englebright, as well as Governor Cuomo, Senate Majority Leader Stewart-Cousins and Speaker Heastie, for this bold step forward on climate and clean energy. This was the product of a significant amount of hard work and the balancing of many different interests.

The Million Solar Strong New York Coalition is comprised of industry, environmental, justice and community organizations united by the vision of a strong clean energy economy that works for all New Yorkers.