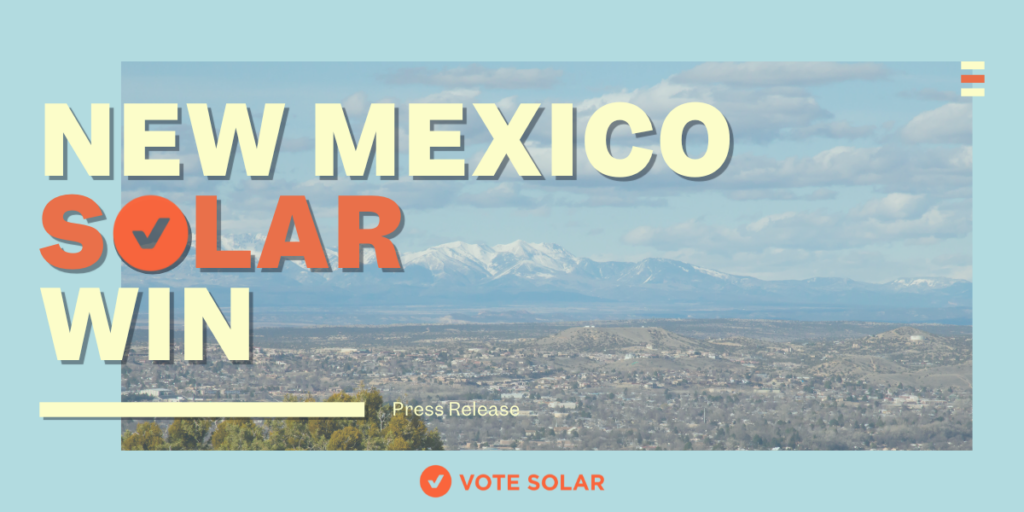 Farmington, N.M.––Today, solar customers won against a municipal utility, marking an additional win for clean energy advocates and owners against unjust solar charges. In this most recent win, solar customers settled litigation against the Farmington, New Mexico, municipal utility, Farmington Electric Utility System (FEUS). The plaintiffs include Vote Solar and eleven FEUS customers with solar systems. The FEUS is owned and operated by the City of Farmington and serves about 46,000 customers. This settlement protects the rights of solar owners in Farmington, New Mexico.

The plaintiffs filed a lawsuit in the United Stated District Court for New Mexico on August 16, 2019, challenging illegal and discriminatory charges FEUS imposed on customers with their own solar panels. Initially, the District Court dismissed the litigation in February 2020, holding that the plaintiffs should have filed their claims in state court. However, on June 28, 2021, the Tenth Circuit Court of Appeals held that the District Court was wrong and reinstated the case in federal court. Several months later in response, FEUS suspended and eventually withdrew the solar charge, further agreeing to refund the plaintiffs from the illegal solar charge. Refunds to the eleven solar customer plaintiffs totalled nearly $20,000.

“It’s too bad that we had to sue Farmington to convince it to stop charging illegal fees to all customers who install solar,” said Farmington solar customer David Fosdeck. “Now that the city finally reversed course after 5 years and agreed to refund the illegal charges it collected, more folks in the community will be able to generate their own energy from the sun.”

“I invested in solar because I’ve seen how relying on fossil fuels has polluted this community’s air and brought worsening droughts and more intense wildfires to this region,” said customer Mike Eisenfeld.  “Thanks to Earthjustice taking our case, my neighbors can now make the same choice without paying discriminatory fees. It’s unfortunate that Farmington incurred over $600,000 in legal fees trying to defend their indefensible solar fees. That money would have been better spent on innovative renewable energy projects for the community.”

FEUS, like many monopoly utilities, used an anti-residential-solar playbook by the Edison Electric Institute, the Washington DC-based lobbying organization for monopoly utilities, outlining how to undermine customer solar and preserve the utilities’ monopoly profits. In response, many utilities across the country adopted or proposed discriminatory charges on solar customers. However, solar customers and solar advocates challenged the utilities in courts. Despite being out-resourced by politically-connected monopoly utility companies, solar customers and solar advocates have been overwhelmingly successful in thwarting anti-solar charges. In addition to the victory in Farmington:

“New Mexicans are on the frontlines of the climate and economic crisis, suffering from extreme temperatures, wildfires and rising prices. Solar allows people to take control back and power their homes in a clean, reliable way,” said Rick Gilliam, Senior Regional Director, DER Regulatory Policy for Vote Solar. “This settlement is more proof that utilities’ cannot hold back solar with discriminatory tariff design. State legislatures, Governors, public utility commissions and courts in red, blue, and purple states across the country have rejected utility efforts to stifle solar with spurious solar charges.”

Clean energy advocates secured nine wins against utilities unwilling to adjust to the new reality. These successes demonstrate the pressure from the public for utilities to accept the expansion of solar energy.