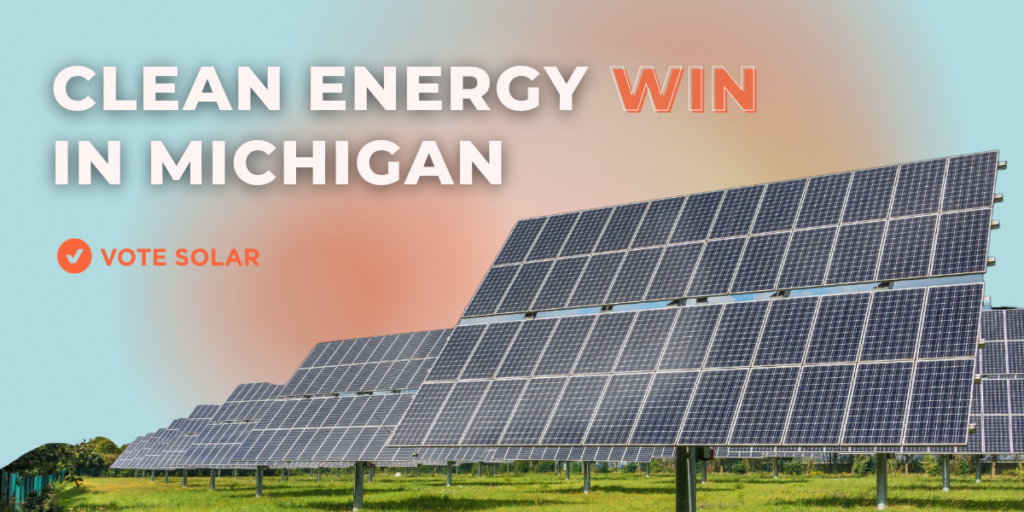 This win comes after more than 75 advocacy organizations and 50 elected officials called for a strong settlement that properly protects historically disadvantaged communities and promotes effective strategies toward helping meet the state’s clean energy goals outlined in the recent MI Healthy Climate Plan. Michigan residents sent in more than 4,000 public comments to the Michigan Public Service Commission (MPSC) in regards to Consumers Energy’s plans. The huge surge of public reaction supported the negotiations leading to a settlement more in line with what Michiganders called for.

With the approval of this agreement, Consumers Energy will retire the last of its coal-fired power plants by 2025, while also increasing its investment in solar. The proactive plan will help to meet the Governor’s ambitious carbon reduction targets, as well as achieve the MI Healthy Climate Plan’s goal of retiring all coal plants by 2030. Additionally, the settlement precludes the utility from purchasing the Dearborn Industrial Generation (DIG) gas plant, which contributes high levels of harmful air pollution in an already overburdened environmental justice community.

“We are excited that the MPSC listened to advocates and approved the settlement. This is a testament to the power of the people and the urgent need to act on environmental justice now,” said Will Kenworthy, Regulatory Director at Vote Solar. “The plan demonstrates Consumers’ commitment to aggressive decarbonization and protecting the communities they serve.”

“Today’s approval is a strong step toward the clean energy future Michigan needs, one that phases out coal-power this decade, avoids reliance on new fossil gas plants, and significantly invests in clean resources such as solar,” said James Gignac, Senior Midwest Energy Analyst with the Union of Concerned Scientists. “Recent research by the Michigan Environmental Justice Coalition and Union of Concerned Scientists shows the state can achieve a 100% renewable electricity standard by 2035 with tremendous health and economic benefits. Consumers Energy and the Commission listened to the thousands of public comments submitted in the case, showing how people and communities can drive change toward more inclusive and healthier electricity plans with benefits for all.”

Additionally, the settlement agreement contains important improvements for the next round of resource planning. It includes a commitment by Consumers to evaluate customer-owned resources, such as rooftop solar, as options for future resource plans. Additionally, the utility agreed to conduct public health and environmental justice analyses as part of its next plan in line with recommendations from expert testimony in the case on how to better assess equity and the environment. Expanded measures for community input and consultation are also included in the settlement agreement.

“The agreement to conduct a robust health and environmental justice analysis in Consumer’s next Integrated Resource Plan (IRP) is a critical step to protecting Michigan’s most vulnerable populations,” stated Charles Griffith, Climate and Energy Program Director at the Ecology Center. “We are also happy that the company agreed not to purchase the Dearborn Industrial Generation (DIG) gas plant, which our coalition’s analysis showed contributes to high levels of harmful air pollution in an already overburdened community.”

“One of the most exciting aspects of this is the recognition by both Consumers and the MPSC of the major role distributed solar plays in our equitable energy transition,” said Margrethe Kearney, Senior Attorney at the Environmental Law & Policy Center.